An early Women in Big Data event was co-located with the Intel Developer Forum in San Francisco in August, 2015. Attendees got a chance to network at the beginning and end. We heard from three speakers, Mike Olson, CSO at Cloudera, Ingrid Burton, CMO at Hortonworks and Laila Razouk, Ph.D, who is an Executive Coach. We also had a presentation by the leadership of the group detailing the mission, organizational structure and future events. About 100 people attended and it was a rare experience to see a room full of mostly women who frequently have difficulty finding each other in the masses of men at a tech conference.

Mike Olson kicked it off with a talk titled ‘Women in Big Data: A View From the Other Side of the Cubicle Wall’. His slides are available here. He acknowledged the three main issues we are all familiar with: diverse teams perform better, fixing gender imbalance is an economic necessity and the pipeline is a problem that needs attention. Mike surveyed women at Cloudera for their thoughts on what they want in an employer and underscored “equality and recognition”. He further acknowledged some fixes to the problem, namely the business systems to increase diversity. Mike also noted management needs to acknowledge and address unconscious bias, train and cultivate allies for women and other underrepresented groups in the workplace. An important aspect to the solution is getting rigorous on compensation and promotion metrics. Lastly, instead of men in leadership roles simply mentoring women, they should instead become sponsors and act in support of women.

Ingrid Burton followed with a passionate talk about her thoughts on Women in Big Data. She shared her life with the audience, both her professional and personal journeys, including key accomplishments and milestones. Ingrid was transparent that over her long career she has seen very little change with regard to solving the diversity challenge. She noted that while change has long appeared on the horizon, it continues to be elusive. Ingrid then transitioned from authentic frustration to inspiration. She got creative and showed an entertaining slide with all the words that came to mind starting with ‘B’ and ‘D’. Ingrid spoke personally to the meaning behind some word pairings including ‘Be | Decisive’, ‘Beautiful | Differentiation’, ‘Believe | Dream’ and ‘Brilliant | Diversity’. Her slides are available here. 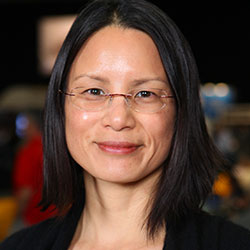