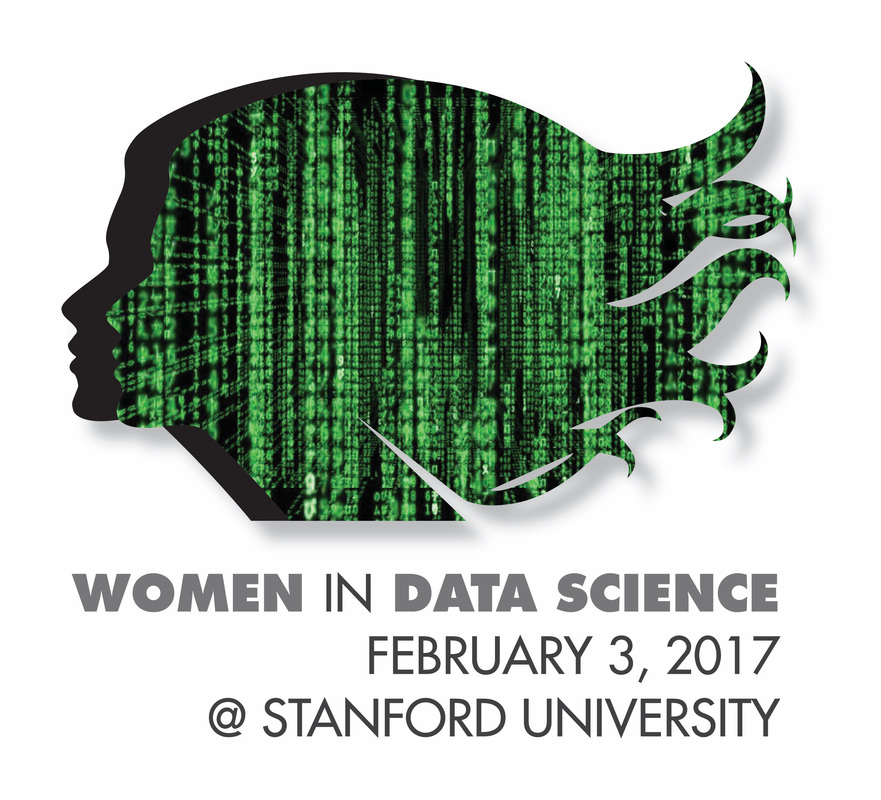 We were fortunate to have attended a live streaming event of the Women in Data Science (WiDS) conference at Stanford University, hosted by Intel’s Women in Big Data Group on Intel’s Santa Clara campus. While we didn’t have an opportunity to see every speaker, we met a lot of smart ladies and had opportunities to have some great conversations.

The first speaker was Diane Green, VP of Cloud for Google. Green shared the story of her journey from Tandem Computers to being one of the founders of VMware, and eventually heading up Google’s Cloud business. She shared interesting case studies for key clients, like Spotify and Pokemon Go. She also shared exciting work they did for Home Depot, which allowed them to leverage their customer data effectively to help compete in retail against Amazon during the holiday buying season. She believes Machine Learning will be the next big revolution, and there will be job displacements, but she stressed the importance of retraining efforts, advising those affected to concentrate on their strengths and interests to find the best alternative careers. It was reminiscent of a recent movie, Hidden Figures, which showed how Dorothy Vaughan taught herself and her team programming skills for the new IBM computer that was most certainly going to displace them in the work they had been doing at NASA.

Fe-Fei Li, Stanford Professor and Chief Scientist of AI/ML working with Diane at Google Cloud, talked about the important foundational work done by Allen Turing in 1938, as well as her neighbor and fellow Stanford Professor Terry Winograd. Turing’s work dealt with sensing and language, while Winograd studied syntax, symantex, and inference.

Deborah Frincke, the Director of Research at the NSA, was one of the most provocative speakers that we had a chance to see. She talked about working with data being messy, but explained how it’s likely messier still for the NSA; the data they work with is provided by people who don’t want the NSA to have it (i.e., foreign intelligence). There are 7,000 languages in the world and NSA is concerned about one hundred of them. She spoke of the importance of setting protocols for the work they are doing, but warned that it should not come from within the agency itself but rather outside agencies, such as civil liberties attorneys, who can be vetted, reviewed, and approved by the agency.

Miriah Meyer from the University of Utah talked about the process of helping a Subject Matter Expert become more effective by using data visualization to come to better conclusions for their business decisions and research results. She stressed the importance of a good skill set of interview tools to Data Scientists in order to develop the models for visualization. It’s important to remember that on the other end of data sets are people.

Sinead Kaiya, COO of Products and Innovation at SAP, spoke about how the utilization of big data will change the way business leaders look at problems and make decisions. While there are still many large companies that make decisions based on executives’ instincts and gut feelings, the complexity of the problems and competitive landscape will force a different way of doing things in the very near future. She talked about how prolific SAP technology is, asserting that if their technology suddenly didn’t exist, the audience couldn’t get a flight home, receive a paycheck or even eat a chocolate bar. Kaiya also talked about the importance of involving the users of the data science solutions in the design of the solution.

Megan Price, Executive Director at Human Rights Data Analysis Group, was perhaps the most compelling speaker because of the noble work her group is doing in using data to champion human rights. She noted that her team is prepared to defend Human Rights violations not only around the world, but here at home as well.

One thing that was clear from all of the speakers is the need for more good data scientists, but also the importance of having more women in the field due to their unique talents and perspectives. It will be an interesting space to watch and will certainly be critical to the way business, governments, and individuals make decisions and address the most important issues and problems that will exist in the future.

About Women in Big Data

The goal of the Women in Big Data Forum is to INSPIRE, CONNECT, GROW, and CHAMPION success of Women in Big Data. As part of this initiative, we would like to encourage and attract more female talent to the big data & analytics field and help them connect, engage and grow.

Soumya is a Marketing Manager in Software and Services Group at Intel, responsible for strategic planning and marketing of system technologies and tools. She has held positions in numerous groups at Intel over the past 15 years, and has earned an M.S. in Computer Science from the Portland State University. Soumya is one of the founding members of the Women in Big Data Forum, she is passionate in helping women grow in their careers, and believes Big Data analytics is the “next big thing,” with huge potential and an ocean of opportunities.

I started my career working for Regis McKenna, one of Silicon Valley’s most well respected marketing gurus who helped define and develop the Apple and Intel brands. After helping develop the business for a handful of Internet start-ups I spent nine years at Adobe, coordinating launches for dozens of new products, developing merchandising and partner programs, supporting corporate marketing campaigns and generating millions of dollars in incremental revenues, which grew the direct channel from about 8% of overall revenue to well over 24%. At Magnet Media, I discovered my passion for video marketing and was the top revenue generator for four years running. I’ve had the privilege of working for some of the most well-known and respected technology brands like Google, Cisco, Symantec, Adobe, Workday, VMware, and more.

I’m fortunate to have finally found the perfect place for me at Indigo Slate, a digital agency with a passion for video and technology that boasts an impressive client list and lots of compelling customer success case studies.